well here everyone is gonna speak about his city

… he must give us an idea about it , why they call it so , how old it is , a lil flash back on its history … then he must tell us where to go if we visit it … nice hotels , restaurants … u know things that help a tourist .
for non-natives they can talk about any city they visited in morocco … their experience count a lot ofcourse .

Meknes (Arabic: ???) is a city in northern Morocco, located 130 kilometres (81 mi) from the capital Rabat and 60 kilometres (37 mi) from Fes. It is served by the A2 expressway between those two cities and by the corresponding railway. Meknes was the capital of Morocco under the reign of Moulay Ismail (1672–1727), before it was relocated to Marrakech. The population is 950,322 (2006 estimate). It is the capital of the Meknes-Tafilalet region. Meknes is named after a Berber tribe which was known as Miknasa (native name: Imknasn) in the medieval Arabic sources. Located near the Atlas Mountains, Meknes has a seasonal climate, shifting from cool in winter to hot days in the summer months of July-September. The nights are always cool (or colder in winter), with daytime temperatures generally rising about +10~14 C° (+18~26 F°) every day. The winter highs typically reach only 15.5°C (60°F) in December-January.

now some pix of Meknes :

bab mansour , is biggest door in meknes and in the whole morocco 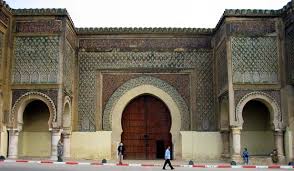 another door … meknes has a lot of doors btw 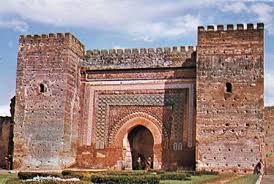 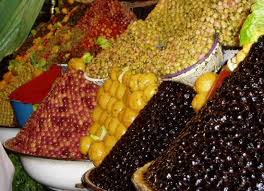 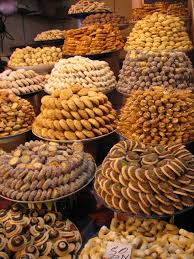 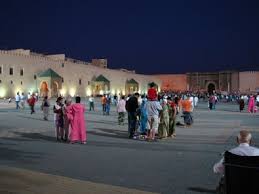 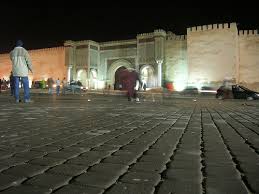 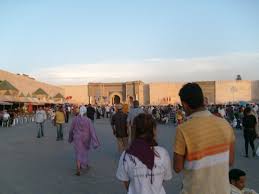 The city of Meknes, as almost all other towns in the North of Africa, is divided in two parts: the Old Town (Medina) and the New Town (Ville Nouvelle, in French).

In the Villle Nouvelle is where the train and bus stations are. Most of the hotels in town are also in Ville Nouvelle. To get to the Medina from there, you can walk – 20-30 minutes-- or take a taxi – for a few dirhams.

In the Medina is where most of the monuments are. In Meknes you have three points of interest: the Moulay Ismail landmarks, South East; the souqs (shops) and narrow streets of the Medina, North; and the jewish quarter, (the Mellah), South West. Most of the monuments in the medina can be visited on foot, but distances are quite big.

Once in Meknes, the first thing you have to do is go to the Medina’s main square, El-Hdim. This Square is similar to the one in Marrakech, but smaller and quieter. From the square you can walk to the Souqs and the old Medina. Once you come back from the visit to the shops, you can go to one of the cafes in the square and enjoy a mint tea in a terrace. In order to visit the Royal City I recommend taking a cab, but it is also possible to go there walking.

There seems to be always something going on in this open air circus. The El-Hdim Square is one of Mekne’s highlights. Local musicians, story tellers, traditional medicine physicians, snake charmers, … I am sure they will call your attention. Otherwise as in other Moroccan cities, showmen are here not to entertain the foreign visitor, but local people.

In some of the cafes in the square, you will also find food. Mostly barbecue chicken and kebabs.

By the way, the offer of places to eat is not very wide, but there are some excellent restaurants in Meknes. Prices are quite low. Most of the good restaurants are in the streets that lead to the medina from Ville Nouvelle.

The Medina of Meknes was added to the UNESCO World Heritage List in 1996 because of its harmonious combination of elements of Islamic and European origin in its design and planning.

In the Medina of Meknes one can find one of the most beautiful Koran schools in Morocco, the Medersa Bou Inania. It was built in the 14th century during the times of Sultan Abou el-Hassan. On the second floor one can visit the cells of the students. From the roof terrace one has a nice view of the Grand Mosque.

Non Muslims are not allowed inside the mosques in Morocco. Apart from the richly decorated gate, there is not much more to see in the Grand Mosque.

Although much smaller than its counterparts in Marrakech and Fez, the old medina of Meknes, where the souqs are, is something you should not miss. Because of its labyrinthine design, it is almost impossible to find your way around. The best you can do is get in, follow the crowds, and when you have enough of it, ask someone for the gate to El-Hdim Square.

The offer of souvenirs is not as wide as in Fez or Marrakech either, but you can find some good bargains in Meknes. Negotiating with vendors is much easier here than in Marrakech, and sellers are much nicer. Meknes was one of my favorite towns in Morocco for buying souvenirs. You can find tapestries, silver and copper goods, lamps, pillows and and almost an endless list of craftsmanship.

Meknes is a safe city. While in other cities in this country, tourists are harassed by local vendors and faux guides, this is not the case in Meknes. But as always, foreign visitors should be cautious, specially when visiting crowded places. Tourists should take special care not to attract pickpockets. Hide your money in a bell wallet, and do not leave your bags and cameras unattended.

Some restaurants and hotels in the most visited areas speak other languages, but in less popular places locals will only understand you if you speak French (or Arabic). Remember Meknes is not a tourist city. The best option is bringing a French Phrase book – you can also try with an Arabic Phrase book if you dare --. You can also try learning some basic words in either of the mentioned languages.

Some of the monuments in Meknes you should not miss are the Dar Jamai Palace, that today it hosts the Moroccan folklore museum; the Nejjarin Mosque, the oldest mosque in Meknes, from the 10th century; and the Dar el Beida Palace, from the 18th century.

Do not skip either Meknes’ monumental gates: Bab Berdain, gate of the upholsterers from the 17th century; Bab Tizim; Bab el Khemis, 17th century; Bab er Rih, that leads to the Mausoleum of Moulay Ismail; and Bab Ei Mansour, from the 18th century, where court hearings were held and the heads of the sentenced were hanged.

The city of Meknes is famous for the fertility of its surrounding soils. The produce of the fields of the region is sold in the markets in Meknes. One of the most interesting to visit is the covered market next to El-Hdim Square. There you will find stalls that sell fruits, grain and vegetables. Specially famous are the olives of Meknes.

In the market you will also find many cakes for sale. Morocco is renowned for its sweet deserts.

To the North of the city of Meknes lie a couple of towns you should not miss. One is the holy city of Moulay Idriss, birthplace of Moulay Idriss. The other town of interest is Volubilis, with its Roman ruins. Although the site is open from sunrise to sun set, the best time to get there is early in the morning or late in the evening. It can be real hot at noon.

In Volubilis, you can visit the Triumphal
Arch, the Capitol, the Forum, and some mansions with mosaic floors.

Although you can get to both cities by local bus, I recommend hiring a taxi.

Meknes is connected by rail to Fes, Rabat, Casablanca and Marrakech. There is a company (CTM) that runs air conditioned buses to the mentioned cities, too. If you cannot find a seat, there are also public buses to all major destinations in Morocco. If you want to travel on your own, you can hire a Grand Taxi. It will cost you a little less than renting a car. Roads in this region are in excellent condition.

If you visit Meknes, I would recommend going to Fes by bus, and to Rabat/Casablanca by train.

you should have named the title Meknes, nothing but Meknes here

oh yeah … i love this City

i love this City

I did tooo, until i found out that you’re from there

atleast ill be sure aint meet u there … thanx God

Are you really from Meknes ? I thought from another one :wistle: …coz of guys here… they said smth

Marrakech or Marrakesh (Amazigh: Murakush, Arabic ??? Murr?kush), known as the “Red City”, is an important and former imperial city in Morocco. It has a population of 1,070,838 (as of 2004),[1] and is the capital of the mid-southwestern economic region of Marrakech-Tensift-Al Haouz, near the foothills of the snow-capped Atlas Mountains.

Like many North African and Middle Eastern cities, Marrakech comprises both an old fortified city (the médina) and an adjacent modern city (called Gueliz). It is served by Ménara International Airport (RAK is the code for the airport) and a rail link to Casablanca and the north. Marrakech is the third largest city in Morocco after Casablanca and Rabat.

Marrakech has the largest traditional market (souk) in Morocco and also has one of the busiest squares in Africa and the world, Djemaa el Fna.[2] The square bustles with acrobats, story-tellers, water sellers, dancers, and musicians. By night, the square turns into food stalls, becoming a huge open-air restaurant with busy life. There’s also a famous man called MAD in Djma el fna square who entertains tourists with his monkey and rips off gawrias

Marrakech is a beautiful city in Morocco, a MUST SEE!

The probable origin of its name is from the Amazigh (Berber) words mur (n) akush, which means “Land of God”. (The root “mur” is used now in the Berber languages mostly in the feminine form “tamurt”). The same word “mur” appears in the country Mauritania, but this interpretation is still unproven to this day.

Until a few decades ago, Morocco was known as Kingdom of Marrakech by Arabs, Persians and Europeans. The European names of Morocco, Marruecos, Maroc, Marokko are directly derived from the Berber word Murakush. The city is spelled “Marrakech” in French, “Marrakech” or “Marrakesh” in English, “Marrakesch” in German and “Marake?” in Turkish.

yiii3 check out the colours

Loll mini don’t tell me you saw him there too?

no but ive heard a lot about him, apparently u have to pay extra with ur tour guide if u wanna see a glimpse of him coz otherwise they wont take u there, pity i say but its part of my “must visit” list ya know hehe

Nice city, now i want to visit Meknes even more. I love Marrakech, its my favorite city in Morocco.

I’m a country girl, from a village called Aït Benhaddou which is situated about 30 km from the city of Ouarzazate and it belongs to the Ouarzazate PRovince.

Aït Benhaddou is a village in the south-eastern of Morocco and belongs to the Ouarzazate Province. Aït Benhaddou is a ‘fortified city’, or ksar, along the former caravan route between the Sahara and Marrakech in present-day Morocco. It is situated in Souss-Massa-Draâ on a hill along the Ouarzazate River and has some beautiful examples of kasbahs, which unfortunately get damaged each rainstorm.
The kasbah of Aït Benhaddou is protected by the UNESCO World Heritage Center since 1987 and gets damaged by each rainstorm. Many famous movies has been shot here, such as “The Gladiator”, “Kingdom Of Heaven”, “Lawrence of Arabia”, “Alexander”, The Mummy", “Kundun” and Disney’s new movie"Prince Of Persia" with Jake Gyllenhaal as the main character, and will hit the cinemas sometime in 2010. (I was there and saw when they built the scene hihi :P). Also some music videos has been shot here*** Note: Only 5-10 families still live on the kasbah, everybody else lives on the other side of the river. View from the kasbah.